Following a lucrative $206,000 purchase of a popular Bored Ape Yacht Club nonfungible token, or NFT, last week, NBA all-star Steph Curry has reached out to his 15.5 million Twitter fanbase for advice on progressing in the crypto game on Tuesday. The Golden State Warriors guard tweeted: “Just getting started in the crypto game…y’all got any advice??” According to the basketball athlete’s Open Sea profile, he currently owns 16 NFTs in total, including the blue-furred Bored Ape showcased in his Twitter profile. Legendary NFL quarterback Tom Brady, currently sporting the Tampa Bay Buccaneers jersey, humorously offered his perspective: Whatever you

Taiwan’s police administration has reportedly arrested 14 people for running a $5.41-million (150 million New Taiwan dollars) investment scam over the past year, involving more than 100 cryptocurrency investors. CIB investigator Kuo Yu-chih said that the scam was led by a local businessman named Chen, who ran the operation on social media platforms. Chen was also reportedly running Azure Crypto Co, a Taipei-based platform that offered various investment services, including cryptocurrency transactions. He explained: “Chen and his staff set up Web sites, and allegedly used photographs of pretty women to attract mainly male victims, many of whom were in retirement

What Cardano’s Alonzo upgrade means for you

Read this article in German, French, Spanish, Italian or Polish. Cardano has been breaking records lately, establishing itself among the top cryptocurrencies in terms of market cap and hitting an all-time-high of €2.61 on the 2nd of September. Partially, Cardano’s success can be attributed to the impending release of the Alonzo upgrade scheduled for the 12th of September. Let’s see what this hard fork means for you. #Cardano #smartcontracts are coming… We’re on track to meet the projected HF dates for both testnet & mainnet #Alonzo upgrade, as Nigel outlined in last week update👇 A new era is set to

Namaste Tribe! 🙏 Audius (AUDIO) is listed on WazirX and you can buy, sell, trade AUDIO in the USDT market. AUDIO/USDT trading is live on WazirX! Share this What about AUDIO Deposits & Withdrawals? AUDIO is a part of our Rapid Listing Initiative. Hence, we will start AUDIO trading by enabling its deposits on WazirX via Binance. What does it mean for you? Deposits — You can deposit AUDIO  from Binance wallet to WazirX. Trading — You can buy, sell, trade AUDIO in our USDT market. When you buy AUDIO, it will appear in your “Funds”. Withdrawals — You will

After four years of development, the Central Bank of Nigeria (CBN) is set to roll out its digital currency project. The launch will reportedly happen on the occasion of the country’s 61st Independence Day celebration on Oct. 1. Nigeria’s central bank digital currency (CBDC) project comes amid significant anti-crypto policies from the CBN and negative cryptocurrency sentiments from several government officials. The digital naira is also coming at a time when its fiat counterpart has plunged to new lows, with the central bank enacting even tighter forex restrictions. Details of the eNaira project circulated across commercial banks in the country

In a recent interview with local Brazilian news outlet Seu Dinheiro, Eduardo Abreu, vice president of new business at payments giant Visa, revealed the company’s intentions to integrate crypto assets onto its platform for both payments and as a store of value, including the leading cryptocurrency, Bitcoin (BTC). Back in March 2021, Visa’s CEO of Brazil, Fernando Teles, introduced the concept of adopting tokenized payments, as well as an application programming interface, or API, designed to bridge the gap between traditional financial institutions and crypto services. In the interview, Abreu shared his belief that greater adoption will require the integration of

Bitcoin (BTC) fell sharply as trading continued on Sept. 7 as a volatile day took BTC price action below $43,000 in one of the most volatile days of the year. BTC/USD 1-hour candle chart. Source: TradingView Whales blamed for major BTC sell-off Data from Cointelegraph Markets Pro and TradingView captured the volatility as Bitcoin suddenly lost the psychological $50,000 level. The move came just hours after analysts jointly agreed that BTC/USD must hold $50,000 in order to preserve bullish momentum. One of them, Cointelegraph’s Michaël van de Poppe, highlighted $49,500 as the point of no return should it fail to stick

Despite the Russian state maintaining a mostly unfriendly stance on cryptocurrencies like Bitcoin (BTC), a major state-backed museum is benefiting from the industry by raising hundreds of thousands of dollars with nonfungible tokens, or NFTs. The Russian State Hermitage Museum, the largest museum in the world, has finished its first auction on the NFT platform by Binance — the world’s largest crypto exchange — selling five tokenized collectibles depicting masterpieces from artists like Leonardo da Vinci and Vincent van Gogh. The auction included five NFT copies of Hermitage-hosted artworks, including Wassily Kandinsky’s “Composition VI,” Giorgione’s “Judith,” Da Vinci’s “The Madonna


Note: This blog is written by an external blogger. The views and opinions expressed within this post belong solely to the author.

Technical analysis has always been critical in determining the general sentiment of the Cryptocurrency market. This is because most traders in the cryptocurrency market rely on chart analysis to identify the next trajectory of a digital asset’s price. The stock-to-flow model is one such frequently used chart for predicting bitcoin’s movement.

Generally, the stock-to-flow model is used with natural resources such as gold or silver. Because of their scarcity and low flow, commodities are sometimes referred to as “store of value” resources, which should, in principle, preserve their worth over time. Due to the fact that bitcoin’s total supply is limited and hardcoded into its programming, it appeared to be an excellent choice for using the Stock-to-flow (SF) concept.

The SF model, promoted by a pseudonymous Dutch institutional investor going by the Twitter handle “PlanB,” has garnered widespread appreciation and has emerged as the premier valuation model for bitcoin proponents. Bitcoin had fit right into this model until now.

Why did traders use the SF model first place?

PlanB’s article “Modeling Bitcoin Value with Scarcity” describes precious metals with unchangeable costliness and limited rates of supply as maintaining monetary roles throughout history. Gold, for example, is valuable because fresh supply (mined gold) is small in comparison to the present supply, and it is impossible to replicate the huge stockpiles of gold across the world. PlanB then claims that the same reasoning applies to bitcoin, which gains value when fresh supply is decreased every four years, eventually resulting in a supply of 21 million bitcoin. 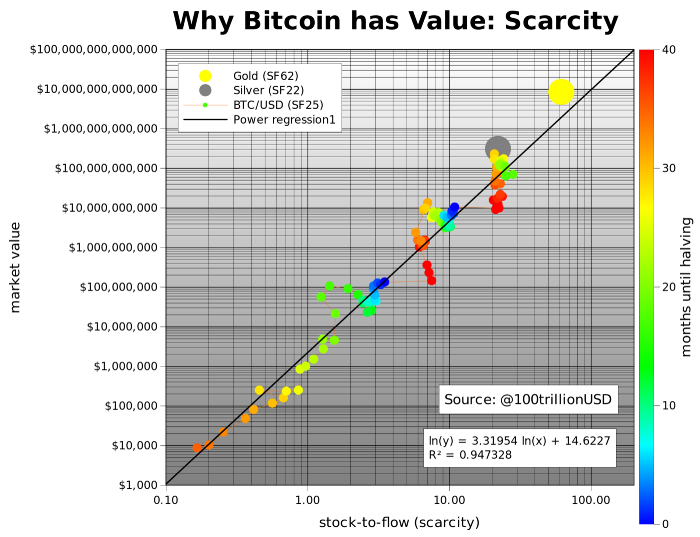 The method mentioned above, according to PlanB, may be used by investors to estimate the future USD market capitalization of bitcoin. Also, the model lends validity to the $100,000 bitcoin forecasts.

As a result, SF has gone viral and generated rags-to-riches fantasies for people betting everything on the future of bitcoin. However, I anticipate that the model’s accuracy will be roughly as good at forecasting bitcoin’s future price as other models were at predicting financial events.

Even Fidelity Digital Assets examined the S2F valuation model in August 2020, indicating that the stock-to-flow approach had some validity.

However, no model is 100% accurate because of the various unpredictable events that could occur spontaneously. For example, the Covid 19 outbreak was a massive hit for the crypto market as prices crashed over a span of days.

As Bitcoin hovers around the $30,000 mark, the price is currently the furthest away from what the chart predicts. If we consider the model, the price should be over $80,000, which is quite a lot compared to current prices.

Early this year, PlanB predicted that Bitcoin might even surpass $450,000 by the end of this year and $135,000 in the “worst-case scenario.” Furthermore, the model forecasts that Bitcoin will reach the much-anticipated $1 million mark by July 2025.

“The model creator tried to predict the continuously surging Bitcoin price based on its scarce nature similar to gold in that it also has a high stock-to-flow ratio. Therefore, the hypothesis is: As Bitcoin’s stock-to-flow rises, so will its price.”

He went on to add that models like this are often established based on historical data and that although some periodic trends may assist in determining the overall direction of the market, specific trends can sometimes be hard to track in advance.

Industry expert, Lennix Lai, elaborated on why this model is failing, stating:

“Despite its limited predictions, the S2F model only had limited power over Bitcoin price prediction because it assumes the production of Bitcoin will be limited. While its simplicity makes the concept easier to understand, PlanB debuted the Bitcoin S2F model back in 2019. Demand back in the time is a different story to now, in which demand has a direct influence on its intrinsic value.”

Over the past year, a lot has changed for the Bitcoin and Crypto markets in general. For instance, the rate of institutional adoption has gone up drastically since 2019. The other major factor being the COVID-19 pandemic that has plagued the world for more than 19 months now.  Lai elaborated further:

“The pandemic has probably also accelerated adoption, as the USD supply has inflated massively over the last year. Investors are seeking alternative assets to place their money in as a hedge against inevitable inflation. We also see daily analyses from well-respected firms and institutions predicting that Bitcoin is undervalued; the Musk effect is an ambush to the market.”

In conjunction with other reasons like the mainstream appeal of nonfungible tokens (NFTs), the Musk effect has also played a significant influence in increasing awareness of cryptocurrencies and blockchain technology in general. Since the beginning of the year, Bitcoin’s dominance as the leading cryptocurrency has declined from more than 60% to 46.3%, indicating a strengthening altcoin sector.
Ultimately, it is safe to conclude that no analytical approach can be touted as perfectly accurate. Perhaps this is the core reason behind professional traders leveraging a combination of different technical approaches. Whether or not the SF model would actually be accurate about its end of the year target is yet to be seen. Plan B has himself stated that the next few months are going to be a “make or break” situation for the stock-to-flow model.


This article was originally published by blog.wazirx.com. Read the original article here